Chris Best has provided business valuation services to privately held businesses since 1987. He is a leading authority on the valuation of businesses that sponsor employee stock ownership plans and the review of ESOP valuation reports for credibility and compliance with standards. M...
Phil Hayes - Berman Hopkins Wright & Laham

Terry is an Accredited Senior Appraiser (ASA) of the American Society of Appraisers (also “ASA”) and cofounder of Empire Valuation Consultants, LLC. He has over twenty-five years of accounting, corporate finance and business valuation experience. He spent six years...

Chris Mellen co-authored "Valuation for M&A: Building & Measuring Private Company Value." He has also authored several published articles on valuation-related matters, led over 100 seminars, and provided expert testimony in court. He is an active member of the AITF a...

John is experienced in the valuation of closely-held business and partnership interests for a variety of purposes, including ESOPs, estate and gift tax matters, litigation support and mergers and acquisitions.  Considerable background in determining discounts and premia for such things as...
Dan Zugell - Capstone Headwaters

Dan is Senior Vice President with Capstone Headwater's ESOP Advisory Group with a wealth of  experience covering many financial service disciplines.   Dan’s experience includes the formation of MetLife’s ESOP program, as well as serving as a Director of...

Chris brings to Strategic Equity Group and its clients over 15 years of financial advisory and investment banking experience. He has extensive expertise in structuring and negotiating transactions across a wide variety of industries, and has prepared financial opinions addressing the value of ...

Before creating es2, Peter was Managing Director and Technical Director at Verit Advisors, LLC.  While there, Peter performed the technical aspects of ESOP financial modeling, valuation, tax, accounting and human capital topics for Verit clients.  Prior to Verit, Peter man...

Unlike narrow specialists, who are extremely well versed in the details of a particular ESOP structure or have broad corporate experiences but little specific ESOP knowledge, a "quarterback" advisor is someone who takes a holistic and comprehensive overview of the client company's needs, and coordinates with advisors to achieve the owners' goals.

A quarterback advisor is the person you usually need in order to conduct a broad feasibility study when exploring options for an ESOP. Such an advisor will take a broad look at your company's entire operations, conduct a company valuation and assess the impact of an ESOP on its future; a quarterback can tell you what employee stock ownership strategy makes sense for your company, how to plan for stock buyback, transfer and pay-off timing.  Our ESOP Quarterbacks help you: 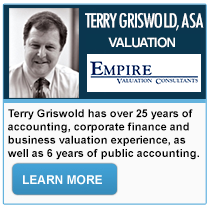