I started out in record keeping, before I even knew what an ESOP was. My first company was SEI, which in the 1970s was the largest provider of trust accounting systems to banks. I helped create the documentation, did sales, training and just about everything else. Today, banks no longer do record-keeping, because it creates additional liability, but they did a lot of that in the '80s.

A trust department would always be separate from the bank itself - we called it the "Chinese wall." Trust assets were invested and weren't available to the bank to make car loans or mortgages, which is why banks needed record-keeping systems.

I worked for SEI when ERISA came around in 1974, with its ESOP provisions. SEI promised its bank customers to develop a record-keeping system that would be in compliance with ERISA, but it didn't work out at first. They went out and hired three of us to do allocations on a calculator and load them into the computer system, so that banks could download them in the morning. We did this until the company hired some cracker-jack programmers from MIT who managed to create an actual record-keeping system on the computer.

In 1976, Congress passed a "Tax Reduction Act Stock Ownership Plan" (TRASOP), and one of our bank clients called in and asked whether our system could handle stock plans. At a staff meeting, we realized that we didn't know anything about stock plans; one of us was to be assigned to go out and find out everything there was to know about stock plans.

We drew straws, and I lost.

That's how I got involved in ESOPs. I went to my first ESOP conference in 1976.

On the ESOP Associations

I wasn't involved in founding the ESOP Association in 1979, but that's when I became a member. In 1980, I became the co-chair of the Association's Administrative Advisory Committee, and held the position for 8 years. I've done just about everything you can do in this business.

I started out as a record-keeper who prepared employee statements; after that, I was a trust officer; then, I joined a consulting company. Later, I was an in-house benefits manager for an employee-owned ship repair company that had 689 workers. After that, I became a trustee again, working for what eventually became SunTrust.

I got out of the business because in the '80s, banks didn't understand the concept of "fee for services." Banks always made their money making loans; they would hire 35 lending officers, but I couldn't get approval to hire a single clerk.

I was around when the ESOP Association was formed in San Francisco; it later moved to Washington. Gene Geer was the first head.

The first big ESOP I ever did was Dan River Mills [in Danville, Virginia]. The year was 1984, the heyday of the corporate raider. The company got raided by Carl Icahn, and in order to save the company and its employees, we used an ESOP to fight him off. The company had excess funds in its defined benefit pension plan; we took the funds and used them to set up an ESOP and take the company private. The story even made the front page of the US News & World Report.

It was also this ESOP transaction that made me a big proponent of communication. The textile industry in this country ended up in a bad way, with most of it going offshore. The problem was that the employees of Dan River Mills didn't understand that their benefits were guaranteed - there was no clear communication with employees.

This is why, to this day, whenever I help with the roll-out of a new ESOP, I set up meetings so that the employees understand what's happening.

From 1986 to 1989, I worked for Wyatt, which was the largest benefits consulting firm in the world. I managed ten Fortune 500 companies, including big, publicly-traded companies like Bausch & Lomb, Bendix and Proctor & Gamble. Many of these companies had retirement benefits plans that we amended into ESOPs. These companies had employee stocks in thrift savings plans, which is how it worked back in the '80s, before 401(k)'s. These got turned into 401(k)/ESOPs, because back then, companies got a tax deduction for paying out dividends to employees through ESOPs.

Currently, I work at First Bankers, and I've been with them since 2002.

The Responsibilities of an ESOP Trustee

One of the things we tell employees all these years is that they become beneficiaries, and one day they could end up receiving huge benefits through their ESOPs. 2 years ago we were involved in the sale of a company, and we created 23 millionaires the day I signed the documents. It was a small machine shop in Addison, Illinois, called CEF; they made airplane parts, and got noticed by a big publicly-traded company. The shop already had an ESOP since 1985, which owned the majority of the company. The buyer offered $86 million for the entire company; the offer was held to a vote, employees voted to sell, and 135 machinists walked away with $58 million. This was a major ESOP success story.

ESOP is a retirement plan, and qualifies under the same tax code as a 401(k). When you implement an ESOP for whatever reason, and work hard to explain the idea to employees, you can change the company culture. The most successful ESOPs have been the ones that have painstakingly worked to change the culture of the company to one of shared ownership. Every day you come to work not as an employee, but as a beneficial owner of the company; we get people to treat their jobs like entrepreneurs. This makes a difference.

The ESOPs that are truly successful are the ones that get employees to understand what it means to be a beneficial owner of a company.

As a trustee, I serve for the exclusive benefit of plan participants. Our main role is to safeguard the company assets, since we hold the stock certificates. However, even though we are shareholders, sometimes with a controlling percentage of shares, we don't run the company. Our exclusive role is to safeguard the retirement funds of employees, and set the value of the stock - for this, we may resort to the services of an advisor.

While it may make sense to try and set a high stock value in order to create maximum benefits for ESOP participants, there are laws that govern the valuation process - they require that stocks be set at fair market value, neither depressed nor inflated. One of the essential tasks of a trustee is finding a valuation advisor that understands ESOPs and knows how to do a valuation by the book.

What makes a successful ESOP?

The success of an ESOP hinges a great deal on the ability of trustees and advisors to change the culture of a company, which is why there are ESOP firms that specialize in communication and motivation. The way to select an advisor who's good at both is to look for someone who really understands the multi-faceted nature of ESOPs as retirement benefits and succession tools, and can explain it clearly to company employees.

Technology is changing the work of an ESOP trustee. We still have to do trust accounting, process the contributions and make distributions. Computer systems have evolved, and employees can now see the account balance on a website, though the numbers are not always updated very frequently - this depends on the specifics of the ESOP.

The biggest change has come in communication. I used to have to do road shows, which was tough for companies that have a number of different locations. Now, I can do webinars, and have a number of different offices watching on-screen at the same time. Technology has made it so much easier to do meetings and communicate with employees much faster. Even though I still travel for a living, I can go to a company's headquarters and do a video conference for all five of the company's locations, instead of having to visit all of them in person. It's great. 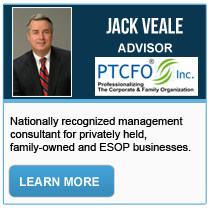 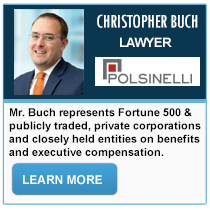 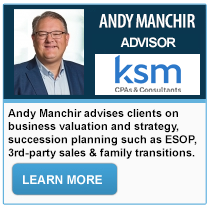 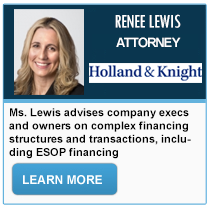 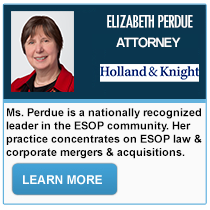