Tom is a CPA and former owner of several CPA firms in central Indiana. His experience in independent auditing, valuation review, and mergers & acquisitions serves him well as he discharges his duties as an independent fiduciary and trustee for ESOPs throughout the U.S. Mr. Potts...

In ESOP Governance, the board of directors' fiduciary authority also appoints or hires of all other parties to perform services or functions for the plan.  One of the ususal delegation of rights and responsibilities by the board is to form an ESOP Committee.

An ESOP Committee (or Administrative Committee, or simply Committee) is usually responsible for the administrative functions have been delegated by the board of directors, and therefore is a fiduciary. The Committee usually has some discretion with respect to plan operation, and, therefore, is generally a fiduciary with respect to certain aspects of the plan, but the board of directors usually retains the right to make and amend policy to itself. 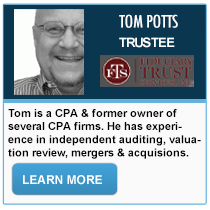