By Kyle Seymour and Lee Eisenstaedt

There are about 7,000 organizations with Employee Stock Ownership Plans (ESOPs) according to the National Center for Employee Ownership (NCEO).  This number is expected to increase over the next 10 years as 200,000 or more privately-held companies change hands each year as aging Baby Boomers retire, with some percentage of these founders/owners electing to form ESOPs that allow them to preserve their legacies while monetizing their assets with minimal taxes and maximum post-sale control.

An ESOP is an ERISA defined-contribution employee benefit plan that invests primarily in the stock of a company.  It holds the shares of the business for employees in a tax-qualified trust that makes them the beneficial owners of the shares of the company while they are employed by it.  (Click here to learn more about ESOP candidates and myths about ESOPs.)

When a closely-held organization transitions to an ESOP, it's not uncommon for the former business owners to have trouble understanding that the rightful owners are now the ESOP trust.  This further increases the importance of adopting basic corporate governance practices, especially as the ESOP evolves from a zero ESOP to a small fractional ESOP to one that has a large portion of the company being employee‐owned.  For example, to effectively support the company's long-term planning objectives and vision, there will need to be a strong board of directors that includes one or more outside individuals and a process for selecting the best candidates to fill those spots.

Succession planning is another issue that every ESOP board needs to address sooner rather than later. Developing strong leadership among the board and management ranks is a proven way to drive value. Their strategic guidance can be key to transitioning ownership in an ESOP company and preserving the corporate culture.

The board of directors (board) is also responsible for appointing the ESOP trustee. The party selected as the trustee may be a bank or outside institution that provides professional trustee services, or it may be someone who already has a relationship with the corporation (e.g., the chief financial officer). In choosing whether to use an external or internal trustee, the board needs to weigh the cost of an outside trustee with the benefit of receiving additional independence, and perhaps ESOP expertise, to manage the fiduciary responsibilities.

The Three Stages Of The ESOP Maturity Continuum

There are other issues that board members need be aware of which are dependent on the development of the ESOP.  The three stages of ESOP development are: 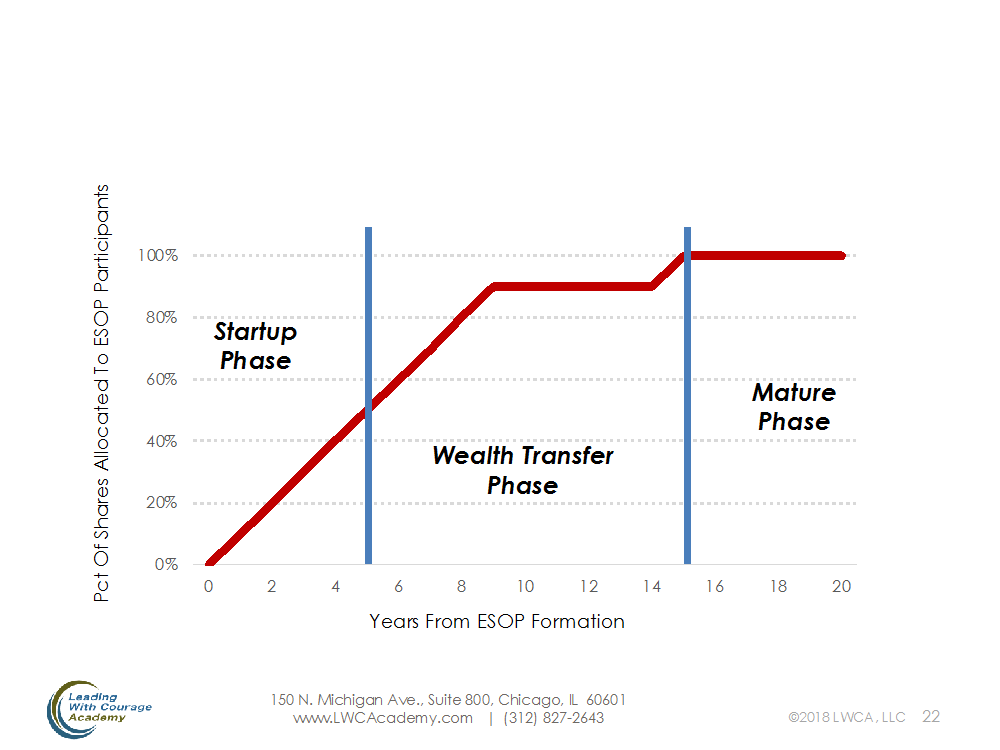 Hallmarks of the Startup Phase are the establishment of good administrative structures and frequent, effective employee communications.

During the first five years of an ESOP, the employees have accumulated little stock.  This is a time when governance, technical, and administrative issues are being sorted out, with the employees noticing little that's significantly different between this phase and the period "before" the ESOP.  It's a time when leaders need to start introducing employees to ownership by being more transparent with the communication of operational and financial information through language and via channels the average employee understands and uses.

While there's usually a desire for great fanfare at the kick-off of an ESOP, over-hyping the benefits and responsibilities of employee ownership from the outset can lead to disillusionment because the allocations of stock to employees can take years to accumulate to meaningful levels.  This is also a time when independent valuation and audit firms are appointed.  Think of the Startup Phase as when you are "sowing the seeds" for what's to come.

Hallmarks of the Wealth Transfer Phase are establishing independent governance and beginning to involve employee owners in decision making.

The second phase of an ESOP begins when the participants in the ESOP have collectively accumulated a majority of the company's stock in their accounts. It continues until all of the of the stock has been allocated to the participants.  During this period, ESOP-incurred debt is being paid down and the cumulative stock holdings represent a meaningful financial stake in the company for individual participants. The selling stockholders are participating in secondary stock sales to the ESOP and are often bringing in professional managers to run the company.

Because of the foregoing, and to avoid concerns about potential conflicts of interest, it's common during this phase for an independent trustee to be appointed to oversee the Trust, as well as a Board to govern it.  It's also a time to allow employees to participate in the selection process for Board Members and to begin using employee committees for simple decision tasks.  It's during this Phase that you'll start to the see if your investments in communications and administrative structures in the Startup Phase are going to deliver the intended benefits.

Hallmarks of the Mature Phase are leveraging the structural benefits of the ESOP and realizing the motivating power of employee ownership to attract and retain talent and customers, improve productivity, and create sustainable profits and long-term value.

The final phase of in the continuum is marked by the establishment of professional leadership and governance as the original owners/founders step back from both.  There's high alignment between the interests of the employees and the ESOP shareholders.  S-Corp election is now feasible, with its attendant tax advantages, and there's a long-term mindset throughout the organization.  Stock allocation is now a choice, rather than an obligation or entitlement, and the issues of retirement planning, ownership redistribution, and stock redemptions must be anticipated by the company's leaders and employee-owners.  This is the time to hype employee ownership and expect employees to act like owners.

Throughout the Maturity Continuum, it's necessary to always be aware of what's coming.  Goals should be set and best practices implemented that are relevant to the Phase you are in as well as the one on the horizon.  It's also critical that you are continuously developing a pipeline of effective leaders and managers who are prepared for what lies ahead.  This includes keeping succession plans current, investing in the essential, non-technical skills of your current and up and coming leaders and managers, and building a high-performing organization.

We've also learned that it's best to allow the organization's culture to evolve / improve with the development of the ESOP.  Using the ESOP to create a culture that doesn't already exist seldom yields the same results as the long-term strategies of continuously improving employee engagement, increasing the self-awareness of leaders and managers of their leadership strengths and limitations, clearly communicating expectations, holding people accountable for their commitments, and educating employees on the benefits of employee ownership.